A Detroit Church is Building Something Big with Tiny Homes 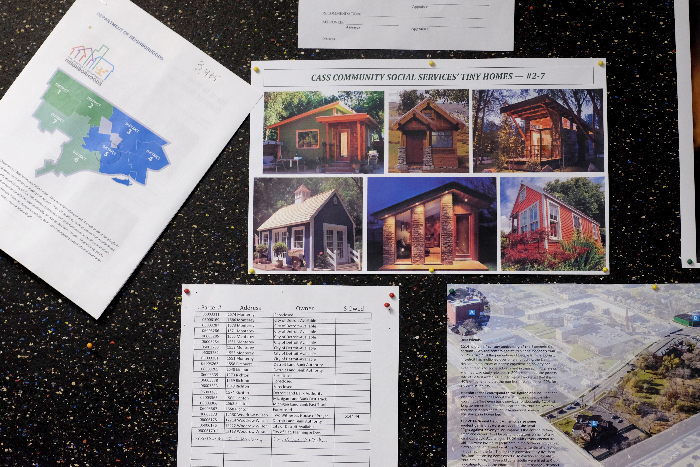 Rev. Faith Fowler of Cass Community UMC displays different tiny house styles on a cork board in the her office. Photo by Diane Weiss from Faith & Leadership.

Excerpt from A Detroit pastor and her church are building something big with tiny homes. Original story by Patricia Montemurri for Faith & Leadership.

In Detroit’s urban core — ravaged by depopulation, unemployment and abandonment — the Rev. Faith Fowler is building something big with tiny homes.

The pastor of Cass Community United Methodist Church, known for her innovative, entrepreneurial outreach to the poor, has conceived and captained a project to build a village of 25 very small houses that the working poor or formerly homeless can rent to own.

But the homes are about more than a place to live, Fowler said. More importantly, they will be a foundation for the low-income poor to grow and hold an asset, to become stakeholders, literally and figuratively, in their neighborhood and in Detroit.

The Tiny Homes project is the result of much planning and thought. These are not cookie-cutter fabrications, mobile trailers or recycled shipping containers; the homes are designed to be not only efficient but eye-catching. Even darling.

Ranging from 250 to 400 square feet, they will have unique exteriors, evoking styles from mountain-lodge rustic to midcentury modern to New Orleans French Quarter. They will have decks and front porches and be built on individual lots.

The Tudor house — in effect, the development’s model — has a good-sized bathroom plus a single main room that features a sleeping nook, a living area, a washer-dryer and a full kitchen with donated granite countertops.

By year’s end, Fowler aims to have seven homes built and occupied. So far, more than 600 people have requested applications, hoping to meet the project’s financial qualifications to rent to own. If residents keep up rent payments for the first three years, they’ll qualify to make monthly payments on a subsequent four-year land contract, offering them full ownership in a total of seven years.

But the Cass development is not intended to be a glorified homeless shelter. Fowler says she’s aiming for a diverse group of inhabitants “so people won’t drive by and say, ‘That’s where the homeless live.’”

In fact, the homes are not necessarily for the homeless. Residents will need to have a source of monthly income. Cass envisions a mix of young and old, low-income workers, seniors on fixed incomes, people receiving disability benefits and students.

The Tiny Homes project will cost about $1.5 million, more than half of which Fowler has already raised from private donations and grants. Each house will cost about $40,000 to $50,000 to build, and volunteer groups, including United Methodist teams, will help with finishing touches, such as drywalling, painting and sodding lawns.

Colmenares said Fowler approaches ministry from an asset-based perspective, drawing upon the talents and labor of people in the community.

At a recent open house, one visitor asked Conwell-Leigh why the houses aren’t designed to accommodate several individuals in shared living space. Conwell-Leigh explained that many poor people live communally out of necessity — in shelters, or with relatives and eating their meals at soup kitchens.

“Faith wants our folks to have what she had and so many of us have — a backyard, a place of our own,” she said.

But whoever lives in the Cass tiny homes won’t be alone. They can get help and community services just across the street.

“They can earn a GED, learn job training, use the gym facilities and get a free daily meal in our programs across the street,” Fowler said.

Mark Linton, 54, who lives in the low-rent apartments that CCSS renovated adjacent to the project, recently toured the showcase tiny home.

He’s on disability. He likes the Tudor’s curb appeal and the 300 square feet of efficient living space, “but it’s smaller than what I’ve got now,” he said.

When he hears about plans for three streets full of similar houses, Linton’s eyes widen, and he smiles.

“We need it around here. We have all these eyesores,” Linton said. “This will be beautiful.”