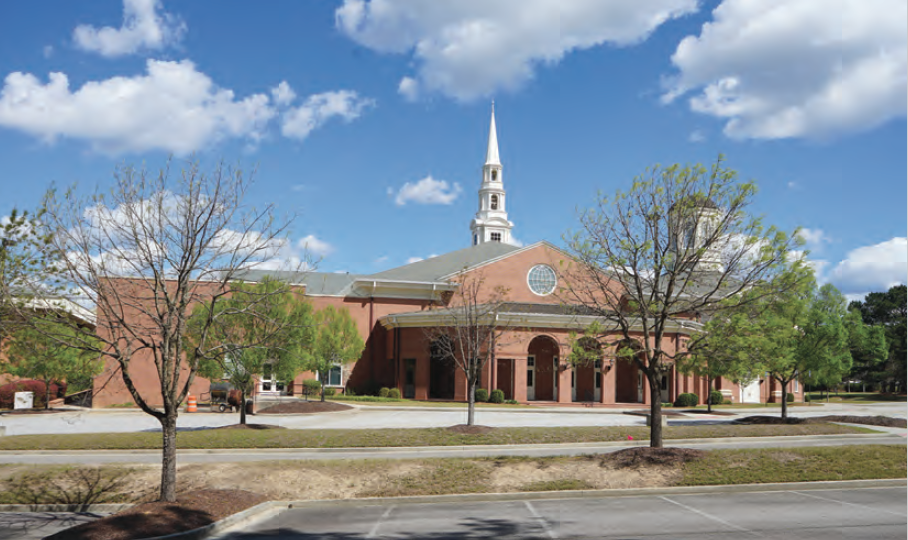 About a decade ago, First Baptist Augusta made a rather routine decision that countless other congregations have made at some juncture over the last 50 to 100 years. The church chose to exercise the right to purchase land that bordered its property. Two residential homes had come up for sale and FBC had first right of refusal on both lots due to the fact that they were adjacent to the church. Like so many congregations, the thought was that one day FBC might want to expand through adding to their parking lot or building a new structure. If nothing else, the lots would help to create a buffer of land and trees between the church property and the residential neighborhood on the other side. In many ways, the decision to purchase the land was a fairly easy one for the church to make.

Ten years later, FBC has moved in a different direction regarding the two lots. In the summer of 2022, the church hopes to finalize sale of the property to a developer. Within a couple of years, the hope is that a new active adult retirement community will stand on the site benefitting both the community and becoming a good, new neighbor to the church.

This decision to sell the property mirrors a shift that seems to be gaining traction with many congregations. Today, most churches don’t see themselves building more structures, expanding their parking lot or spilling over onto the next city block. In 2022, numerous churches are sensing that they have more land and buildings than they need. They are beginning to think about reducing rather than increasing their footprint. In many cases, this is a way to right-size one’s physical plant. At the same time, it can also be a financially beneficial decision on multiple levels.

In the case of FBC Augusta, part of the history behind the sale was having the right conversations at the right time. About two years ago, the congregation had a leadership group that was actively discussing debt reduction. At the time, the church had about $4 million of debt and wanted to significantly reduce this amount as quickly as possible. Amid these conversations, a church member who was aware of the focus on debt reduction also began to work professionally with a group actively hoping to purchase property in the Augusta area to build an active retirement community. Knowing the type of property that his clients were seeking, the church member was able to present the idea to both sides as a possible win-win opportunity. Though the opportunity was unexpected, church leadership was able to quickly pivot, recognize the possibility in front of them and take advantage of the situation.

Though not every church has someone who literally comes knocking on their door wanting to buy a portion of their property, many churches do own more land than they need or than they have a vision for using at some point in the foreseeable future. From that perspective, the story of FBC Augusta, their decision to sell property and the thought process followed by the congregation along the way, provides a valuable example for learning and consideration.

THE POWER OF PLANNING & PATIENCE

Part of the story of FBC Augusta’s decision has been the constant role that good, strong, proactive planning has played and continues to play in the process. As has been noted, when the opportunity to sell property came about, the church was already engaged in the process of developing a strategy for reducing their debt. These conversations led to the land sale being both suggested and considered.

At the same time, now that the agreement has been entered into between the church and the developer, the church has pivoted in a new direction. Leadership at FBC Augusta is now focused on planning for the future. The church wants to be ready when its new neighbors begin to move in. The church is actively considering how to make sure that it is adequately and appropriately staffed to minister to this influx of older adults who will live in the retirement community. Church leadership is also evaluating the facilities while asking what sorts of changes need to be made to accommodate and attract this population. The leaders of FBC Augusta don’t want to simply be good neighbors, they want their church to be an attractive, meaningful place that can be an ideal new church home for the residents of the retirement community.

Another attitude that has shaped the congregation in the process is patience. Throughout the journey, church leaders have worked hard to take necessary steps to fully think through and vet the decision with the developer in a slow, methodical way. They have also worked with the developer to ensure that other existing neighbors impacted by the new retirement facility understand what is happening, have their questions answered and feel good about the decision.

Further, FBC’s leaders have been clear that this decision is not about selling property quickly. Instead, it is about selling property to the right kind of buyer. The retirement community option included not only revenue possibilities but also huge opportunities for ministry and even a potentially exciting living option for existing church members. In other words, if the proposal from the developer had been to build something that the church did not feel good about, they would have had no problem declining the opportunity and being patient.

As with any such decision, the choice to sell property by FBC Augusta has not been without obstacles to be navigated. Three challenges come to mind that are worth pondering.

First, as has already been mentioned, the church has worked hard to be a good neighbor and to communicate clearly to others nearby about the development. Some of the concrete steps taken have included the developer offering focus groups for the community about the project, offering clear messaging that the retirement home is not owned by the church and listening to concerns about traffic impact while seeking solutions.

Second, church leaders have certainly had to respond to a few members who felt that selling the property wasn’t a wise decision. Again, churches have often been in the property acquisition business not vice versa. So, living into a day where congregations are looking to decrease their footprint remains a new paradigm.

Third, FBC Augusta leaders have also had to know when to decline parts of the opportunity. One element of the journey involved the opportunity for the church to also sell the developer a portion of the church parking lot and thus increase the total purchase price by a significant amount. Despite the additional revenue this would have generated, church leaders ultimately decided this wasn’t in their best interest.

WHAT TO CONSIDER WHEN CONSIDERING A LAND SALE

FBC Augusta’s story offers lessons in planning, patience and strong communication with one’s community. A few other items learned along the way mentioned by church leaders from their experience are also worth noting.

For one, church leaders emphasize the importance of church trustees in the process. Often, congregations either don’t have trustees or never use them. Yet, the FBC Augusta Trustees have been critical to this process. For their part, the church has made sure over the years that they asked people with backgrounds in banking, law, accounting and real estate to serve as trustees as the focus of this position in most churches is to represent the church in property, legal and financial matters. Thus, when the opportunity with the land sale arose, the church already had the right people in place to lead the congregation through the process.

Also, the church points out that there is a key role that the senior minister can play in such a process. If good lay leadership is in place, like the church trustees, to handle the business side of the process, the pastor can be freed up to focus on the relational side of the decision with both church members and the community. This relational element is every bit as critical as the business side.

Finally, the church leaders are clear that this is a long process that includes lots of unknowns every step of the way. At FBC Augusta, the first conversations about selling the property took place in early 2020 with groundbreaking not happening until the summer of 2022. To make such a decision, churches must be comfortable with the journey and the fact that you can never anticipate everything that will happen. They must also recognize that there will invariably be missteps and unexpected results. Yet, in so many matters of faith, the hope is that in the end, the risks and challenges are far outweighed by the end result.