Pledging to Create a Better Tomorrow

In 2017, Temple Shalom of Naples joined a growing number of Jewish organizations who embraced a new financial model known as “open commitment.” These congregations left behind the prior approach of “dues” and sought to create a more positive engagement for giving to the congregation. The past year demonstrated the value of this approach, as our synagogue faced the unprecedented challenges created by COVID-19. Before examining what took place this year, it is important to start with the historical perspective.

For the majority of the 20th century, American synagogues embraced a “dues” model to provide resources for the congregation. An individual or family was expected to pay a flat fee to belong to the congregation and receive membership status. This became such a ubiquitous practice that potential members would often inquire about the cost of dues prior to asking about the size, religious affiliation or history of the congregation. While the dues approach offered some modicum of stability, it came with a high cost.

On the membership side, the potential of paying dues served as an entry barrier. Prospective members would choose not to join without having interacted with clergy or existing members because the dues amount felt too high or was financially unattainable.

Additionally, if one could not afford dues, there was a cumbersome and embarrassing process to request a financial arrangement. Even as that process was simplified, the psychology of having to ask to pay less left many feeling on the outside before they even walked in the doors.

The dues model also established a transactional relationship for most members with their religious and spiritual home. Their entry point began with a conversation about the cost of joining, and that financial arrangement continued through regular billing and campaigns that focused on raising money to cover operating costs. This often resulted in a lack of engagement from the average member. When s/he felt that the services provided by the synagogue were no longer necessary, it became preferable to leave rather than pay for unused services.

Concerned by these trends, Temple Shalom, along with a number of other synagogues, decided to shift directions. Turning to the story of Moses for inspiration, we drew upon the image of the Israelites building the Mishkan. Moses asked the people to bring gifts as they were moved by their hearts. In lieu of a “dues” approach, Temple Shalom asked its members to opt into the voluntary pledge system we call L’Shalom (which can be taken to mean “For [Temple] Shalom” or “For peace”). Each year we let the congregation know in full transparency the cost of operating our synagogue. They are also informed of a sustaining pledge amount, which represents the amount per adult in the congregation necessary to sustain our operations. We then ask each individual to make a pledge from their heart. Whatever the amount, we say thank you and welcome them into the Temple Shalom Family. 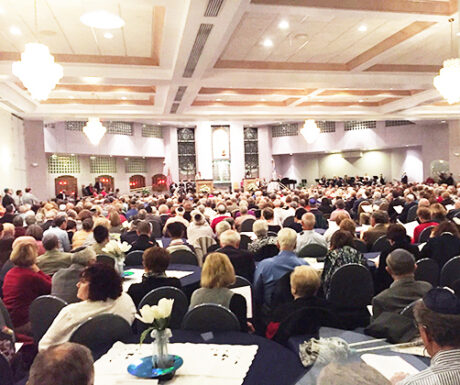 In the first three years, our membership grew a staggering 50%, going from 500 households to more than 750. Many who previously hesitated to join a congregation and pay “dues,” felt welcomed by a model that invited them to give at their own level. Seasonal members began at lower levels, reflecting their shorter time locally, but often began to raise their gifts as they felt connected and engaged by the community. Each year we included the story of the congregation – sharing how their gifts from the heart made an impact in the sacred work of the congregation. We received significant positive feedback about the model, especially the narrative element that showed we were not just asking for money, but also showing how their gifts created opportunities to invest in the congregation. We were surprised to hear from members that it feels better to give what you pledge, rather than what someone else tells you to give–even when the amounts are the same!

There have been growing pains, as one would expect in any new approach. We find that we must consistently reinforce the messaging to our members, as well as to those outside, because this is such a departure from what most expect at a synagogue. Internally, we still have to find the right balance between asking for pledges and encouraging people to be generous without crossing the transactional line. It is also challenging to predict how to address increased funding needs – raising the sustaining amount is not the same level as one had with raising the dues. One is a suggestion, the other an expectation.

Overall, the pledge approach enabled our congregation to weather challenges from outside in ways that we did not anticipate. During the economic crisis of 2007 and 2008, we witnessed a dramatic drop in membership as it became a financial burden. Instead of asking for dues relief, members chose to walk away. That caused significant financial stress to the congregation. This current economic downturn, caused by the pandemic, demonstrated the difference. The flexibility of the pledge system permitted members to adapt to their conditions and situation. Some have lowered their pledges, but they remained members. In the long run, that is healthier for the organization. It is easier to retain and sustain, than it is to try to regain someone who has already ended the relationship.

Rabbi Adam Miller’s experience of “finding the right balance between asking for pledges and encouraging people to be generous” is one faced by religious congregations of all types and all faith traditions. Congregations have a dual role: they are nonprofit organizations that accomplish their mission through the gifts of their members and supporters—and they’re communities whose work is at least in part to cultivate values and promote virtuous faith practices like “generosity”. The balance between these two objectives—both sound organizational fundraising and moral formation of members—requires leaders who are comfortable with both objectives and congregations that offer the consistently reinforced messaging that Rabbi Miller describes.

In an era of increasing religious disaffiliation (26% of Americans identified themselves as religiously unaffiliated in 2019, up from 17% in 2009) more and more people are unfamiliar with what happens inside faith communities—and the common impression for many may be a general suspicion that “all they want is your money”. Congregational leaders do indeed hope to have the resources they need to do their work and generous people in their communities, but no clergyperson (or at least none who are effective!) intends to treat people as sources of revenue. Financial pressures, or simply an unexamined approach to inviting contributions, however, may lead to messaging that gives this impression, signaling that what matters to the congregation is what one gives.

One way to approach the tension between organizational fundraising and moral formation in generosity is simply to pay explicit attention to both objectives separately:

What are we doing to help the people here become generous with what they have as a matter of faith? Children’s and youth education play a role in this objective, along with preaching and teaching, premarital counseling, end-of-life conversations, and other formation moments within the faith community. Celebration of generosity in all its forms—time, relationships, and gifts shared both inside and outside the congregation—can be lifted up as examples of faithful living.

What are we doing to help the people here know that this is a worthy place to exercise their faithful generosity? Transparency in congregational finances, best practices in making it simple and secure for a donor to make a contribution, and clear communication of the impact of the congregation’s work all serve to inspire generous people to give confidently and “from the heart”, as Rabbi Miller puts it, to the congregation itself.

For leaders used to the expectations of a dues or strict tithing model, it may feel strange to acknowledge that the congregation is one among many potential recipients of a giver’s generosity. However, ushering people into lives of generosity as well as into a generous relationship with the congregation strengthens both finances and faith, and may grow congregational giving to be the giver’s first priority.