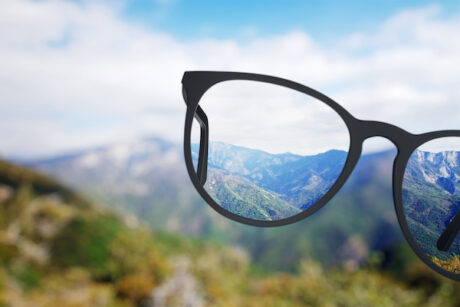 Economic Challenges and Possibilities in the Work of Religious Leaders

At a recent board meeting for First Church Anywhere, FCA’s pastor and lay leaders were wrestling with budget priorities for the coming year. Several board members, aware of Pastor Maria’s astronomical seminary debt, urgently wanted the congregation to help relieve that debt, in the interest of retaining their gifted young pastor despite a salary that had fallen far behind inflation.

Other board members, worried about the effects of the local economy on the financial well-being of people in the pew, were reluctant to present a budget that would pressure anyone to make higher pledges, lest people walk away from FCA altogether. Still others (especially Joan, an ailing 88-year-old who knew that her own pledge had covered 10 percent of last year’s budget) wanted a consulting line to help FCA recruit new givers for the sake of future organizational sustainability.

Meanwhile, two board members were pushing for a signature investment in a new community collaborative to build affordable housing, arguing that FCA needed to get outside its walls and become a serious partner for community impact, or why be a church at all? To which another member replied, that money would be better invested in the Poor People’s Campaign calling for change in national economic policies, not just local band-aids!

And Pastor Maria, taking it all in, pondered whether she should actually preach that sermon on reparations after all.

Religious leaders today are awash in economic challenges and possibilities. (In fact, aren’t we all? As a recent news article noted, the pandemic has given everyone an education in supply chain theory.) But for religious leaders in particular, economic issues have been building for years, as patterns of religious participation and giving shift and long-established assumptions about ‘givers and joiners’ fall away.

Standing on this shifting ground, how can a leadership team find the language to talk about the range of issues tangled up in a single board meeting like the one above?

Perhaps a good place to start is by noting–even naming–the multi-dimensional economic reality of religious institutions and acknowledging that, as leaders, we are (always) choosing to attend to one dimension over another.

There are at least four dimensions of economic challenge in the work of religious and other leaders right now. 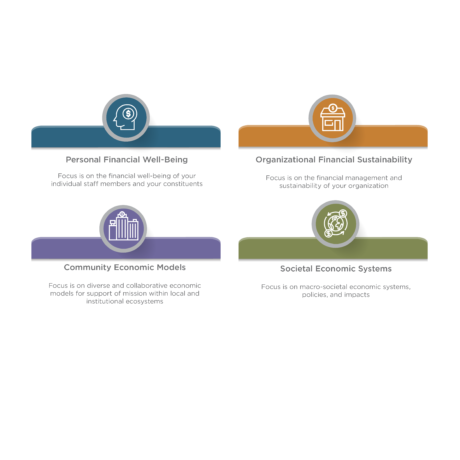 The First Dimension is Personal.  This dimension addresses the individual financial well-being of staff and constituents (think of debt-burdened Pastor Maria). What economic changes are affecting individual well-being in your context? Increased costs of food and transportation? Lower levels of saving, and higher levels of debt? How are you, as a leadership team, considering these challenges for staff and for constituents?

The Second Dimension is Organizational.  This dimension addresses the financial well-being of the organization itself. What are the biggest challenges to your organization’s financial health? A building in need of a new roof and boiler? Increased costs for employee health care?  An aging donor base made up of ‘fewer givers, giving more’? (Think of anxious, ailing 88-year-old Joan.) How are you, as a leadership team, talking about this dimension with one another?

The Third Dimension is Local. This dimension addresses the local eco-system for your organization. How does your local economy show up in your leadership team meetings—as a neutral context, an active problem, a fresh set of possibilities for partnerships in support of mission and ministry? (Think of FCA’s two board members advocating passionately for the new community collaborative.) How are you, as a leadership team, naming and engaging this dimension?

The Fourth Dimension is Systemic.  This dimension addresses macro-level economics systems and policies and their impacts. How does your board or organization talk – or avoid talking about – the impacts of finance-capitalism, income inequality, historic racial inequity and injustice, and their implications for your budget decisions, your allocations of resources? (Think about FCA’s exchange re. the Poor People’s Campaign, and Pastor Maria’s sermon on reparations. Will she preach it after all?) How are you, as a leadership team, naming and engaging this dimension?

Naming the four dimensions will not relieve Pastor Maria—or her church board—or any of us—of making hard decisions to invest in one direction or another. The four dimensions are just that: dimensions of a whole. They are interconnected, not separable. Attention and resources put toward one dimension will likely pull attention and resources away from other dimensions. But the act of naming may make it easier to work through those hard decisions together and to see not only old challenges but also the places where new opportunities abound.

If, in these complex and shifting times, we do not acknowledge the interconnected economic challenges we are facing, it will become increasingly hard to see clearly at all. But if we can learn to ‘see in 4D,’ new opportunities for faithful giving will become visible, and new ways of being in community possible, for our life together.

Lake Institute has been working with several creative partners, including Elizabeth Le’anani Coffee, the Community Engagement Facilitator for the H. E. Butt Foundation in San Antonio, TX and a graduate student at the Lilly Family School of Philanthropy at Indiana University, to develop the ‘four dimensions’ into workshop and discussion formats.  Below, Elizabeth reflects on her learnings from piloting the 4D Framework with religious and nonprofit leaders in San Antonio.

In the past year, I have sat across virtual and literal tables, over coffee, listening to nonprofit leaders and pastors talk about the financial uncertainty they were experiencing. Inevitably, our conversation would transition into larger economic uncertainty. And often, in that transition, I sensed a move from feelings of isolation to feelings of solidarity, born of recognizing themselves as part of a larger ecosystem and reckoning with fiscal strains that were begging for alternative pathways forward. The idea of treading those new pathways was both daunting and invigorating, threatening and hopeful, stunting and yet sparked all kinds of imagination.

In early 2021, at the request of Lake Institute’s Shifting Ground initiative, I also designed and led a series of workshops with nonprofit leaders and clergy in San Antonio, using the four dimensions outlined above by Elizabeth Lynn to better understand how leaders are experiencing this economic uncertainty. Five themes arose from those sessions that I find to be common even in my more recent coffee conversations.

Everyone is tired
Whether it’s staff fatigue, fundraising fatigue, or zoom fatigue, leaders are exhausted. These last two years were ones requiring decisiveness, drive, and determination. But on this shifting ground, everyone was already weary before the pandemic.

Uncertainty for 2022
With public assistance, responsive grantmaking, and rallying of donors and tithers, 2020 and 2021 were overarchingly not as financially burdensome as these leaders might have thought. However, as they look ahead, there is GREAT uncertainty as to whether their organizations or churches will survive 2022.

Our larger economic systems are broken and perpetuate brokenness
With the pandemic exacerbating what was already economically inequitable across the country, leaders say it’s time for a reckoning with these realities. Tied deeply to the racial reckoning our country is going through, they name economic justice as part of that work that needs to be done.

A desire for collaboration
They desperately want companionship in charting these uncertain waters and carving new paths. They are ready to explore new or reimagined partnerships, grounded in a belief, taught to them through the extreme isolation of the pandemic, that they are better together than they are separate.

There is a clear cry for rest, resilience, imagination, healing, and collaboration. And I suspect, on this shifting ground, that cry will only deepen. However, I also believe that creativity is alive amidst this disruptive moment. I’m hopeful for what will emerge.