If your goal is to ‘get a gift’ from a donor…the transformational stories will stay under lock and key. If, however, you view yourself as a guest who is privileged to be welcomed in the life of another person, the seeds will be planted for a very rich and fertile relationship…
It is in this ‘safe place’ that transformational stories are most often lifted up and shared.
– Henry Freeman, Unlacing the Heart: Connecting With What Really Matters

In my personal life, I have just finished a two year spiritual director formation program through the Benedictine monastery near my home. I have been training to serve as a particular kind of “guest,” as Henry Freeman puts it from the context of religious fundraising—one who comes alongside the life and stories of another person and listens for transformational moments that may be emerging in that person’s spiritual life. Along the way of the spiritual directors’ program, I’ve found meaningful points of overlap between the process of spiritual accompaniment and the work of integrity-filled religious fundraising. One key area of overlap has been the question of discernment. How do donors discern their giving? How do congregations and religious organizations discern their mission and vision in which those donors might participate? Those questions of fundraising discernment have resonance with spiritual traditions of discernment.

Discernment is More than Decision Making

In either case, “discernment” isn’t just a dressed-up word for “decision making.” Discernment is the process by which people clarify their choices and values in order to see which next step best aligns with what they believe to be the right thing, so that then they can make a decision. In some sense, it is a process of clarifying one’s choices and comparing them with one’s “yardstick” that holds meaning, with an expectation that God is in some way present and active in the process.

In a purely financial decision for a giver or an organization, one might set the yardstick at the line of “tax advantage” or “revenue maximization,” and then compare one’s options to those goals in order to make a decision about a donation or an organizational course of action. For a number of religious organizations, a move toward business practices in their administrative work can creep beyond matters like accounting and financial controls and start to shape the yardstick of meaning by which they do their work. I know in my own past congregational leadership I sometimes used to invite people to make gifts and set goals based on this kind of decision-making, and I hear it sometimes in the organizations with whom I work now.

But spiritual discernment invites a different yardstick and a different process, one in which the hope and goal is to align one’s personal or organizational decisions with what one holds sacred. In the tradition of spiritual direction in which I’ve been formed, a director is not aiming toward any particular outcome with a directee—only that both director and directee would be able to pay full attention to God’s stirring. In spiritual discernment work, that would mean that the directee is able to clarify what that sacred yardstick is for them in their tradition and understanding, and then reflect deeply and prayerfully on the choices they see before them. In the course of that process, they wrestle with which possible next step is best aligned with God in order to make an important decision.

One clergy leader who had come to regard his work from a spiritual direction perspective was starting in a new position when he was asked, “What’s your vision for this congregation?” His somewhat unexpected response was, “I hope you won’t be disappointed, but I don’t have a vision for this congregation.” (This is generally not what clergy leaders say to their congregations!) He went on to clarify, saying, “I’m trying to understand what God is doing for this community and move that forward.”1 Most religious leaders would likely agree that this is ultimately what they hope to be doing in setting organizational goals—but the process sometimes looks more like the work of a CEO than that of someone facilitating spiritual discernment.

From a fundraising perspective, the work of discernment and engaging the sacred stories of both the giver and the organization is also what many fundraisers and leaders would hope to be doing, but it’s not always the case. Sr. Gloria Marie Jones, OP observed this in Ask for the World: Catholic Sisters and the Spirituality of Fundraising:

A Catholic donor shared his frustrations with me—For years, church officials had asked him for major gifts. Each time, they prepared carefully and made a strong case for support. But no matter how well thought out, the conversations were always transactional and never included a spiritual dimension. It seemed strange to him that people of faith would leave this out. “They always asked for my money—but they never asked about my spiritual life or how I felt in my soul.”2 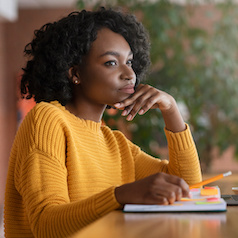 One Process of Discernment

Charles Collier, Senior Philanthropic Adviser at Harvard University, counsels that key questions of discernment to ask in conversations with people who are considering their own giving include:

Another Process of Discernment

Ignatian discernment, in the Christian tradition from St. Ignatius of Loyola, the 16th century Spanish priest and founder of the Jesuits, is part of an extensive spiritual discipline, but at a very basic level, it invites a person to identify whether a particular choice would move them more toward “consolation” or “desolation.”

A choice that leads toward Consolation:

A choice that leads toward Desolation:

Through a combination of an online learning platform, weekly large group and smaller peer group sessions, participants are able to learn at their own pace through a variety of mediums. One participant told us they “like the way the platform helped me to keep pace and know what I should be working on.” Another participant said, “I think this is a great format. It allows me to take part in a broader range of educational opportunities.” And finally, we were told that this platform, “allowed me to prepare for the online session and learn in a way that fit my schedule.”

There are still several opportunities to take the course this year, and dates for 2023 will be coming soon.

Learning Forte is on a mission to help faith-based leaders and organizations reach and teach people in a changing world. This ecumenical team, led by Stacy Williams-Duncan, brings expertise in online teaching and learning, instructional design, digital systems, and organizational leadership to their work with clients, and now to their online learning platform, the LF! Hub.

The new Forte Pass, a yearly subscription on the LF! Hub, is available now, and includes on-demand training, their foundational course “Design and Deliver,” a monthly “Learning Live” Q & A with LF! leadership and team members, and discounted facilitated courses.

Learning Forte would like to extend you the special offer of $75 for your first year of learning. Use the code “halfpricepasslake” when purchasing your Forte Pass to receive half-off the regular price of $150/year.