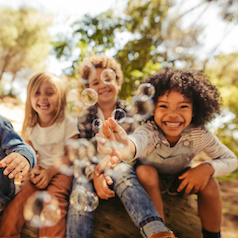 My family offered direct-withdrawal congregational giving before it was cool. When I was a child, thirty-some years ago, my parents automatically put $1 of my allowance into savings and $1 into giving to our congregation. (There was also a $1 penalty when my room wasn’t clean—but that’s another story…) As an adult, I appreciate their efforts—but as I reflect, I recognize that I more or less just thought of my allowance as being a total of $7, because I never saw the rest: I’m not entirely sure that I was absorbing the lessons about saving and giving that they were trying to instill.

In conversations with congregational leaders now, I hear questions about this kind of formation: How will our children and young people (and adults, too) absorb the values we have about generosity, especially if they never see people making gifts?

Lake Institute regularly lifts up the work of Christian Smith’s Science of Generosity initiative at the University of Notre Dame, a tremendous source for in-depth sociological research about the role of generosity in people’s lives. They observe:

“[Generosity] is a learned character trait…It is not a haphazard behavior but a basic orientation to life. What generosity gives can vary: money, possessions, time, attention, aid, encouragement, and more but it always intends to enhance the true wellbeing of the receiver.”

Generosity being a “learned character trait” also means it can be taught—and that’s where communities of faith can and should play a key role.

There was a study that made headlines a few years ago that purported to show that children raised in a faith tradition were actually less generous than children raised in non-affiliated families—and this puzzled and shocked people so much that the researchers were challenged to return to their data, where they discovered some serious errors in their coding and calculations and wound up retracting their study entirely. Indeed: faith communities do have a generally positive effect on the generosity of those formed in their traditions! Of course, stinginess is no moral virtue for anyone, religious or not, and generosity is one of the values in which formation is essential for growth for themselves and their children.

So how do faith communities support growth in generosity when so many givers are giving “invisibly”—with digital giving and online worship participation growing so rapidly both before and during the pandemic and creating changes that seem likely to persist long beyond it? Again, when I reflect on my own formation, I realize that while the $1 donation from my allowance that I never saw might not have had much impact on me, my parents’ conversations about it did—along with their conversations about their own giving. Even more importantly, their actions as generous people made a huge difference: giving “time, attention, aid, and encouragement”, as the Science of Generosity definition puts it, formed me to see that that was important to them—and it made it important to me.

This formation happens beyond families, too: Rabbi Ashley Berns-Chafetz is launching a semester course as the principal of the Glazer campus of Wilshire Boulevard Temple Religious School in Los Angeles, where the students will learn the faith foundations of giving and how nonprofits and generosity intersect to make a difference in the world. Lake’s friends at Honeycomb (formerly the Jewish Teen Funders Network) take up that work nationally with adolescents, creating resources for leadership formation and to invite young people to experience the joy of seeing the difference that giving can make.

In my own pastoral experience in churches, I’ve seen similar effects with younger children “voting” with their giving during Vacation Bible School about which Heifer Project animal they want to donate as a group to families around the world. Likewise, teenagers experienced the impact of generosity as they engaged tangible projects like collecting supplies for people in vulnerable situations, like those experiencing homelessness or being released from jails.

Carolyn C. Brown, a faith educator in the Christian tradition, offers seven principles for teaching children at various ages to “love their neighbors”—and the practices that she points to can be a guide for those school and congregational leaders looking to support families and young people in growing generosity:

Families and teachers are looking for guidance in how to go deeper in helping young people grow in generosity, and faith communities can step into the gap to bring generosity to life for everyone, from preschoolers on up, drawing adults and children alike into the joy of giving.

For the past five plus years, I’ve been working with the National Initiative to Address Economic Challenges Facing Pastoral Leaders, a Lilly Endowment initiative generously hosted by the Center for Congregations.

Our 43 grantees are doing creative, persistent work, both equipping pastoral leaders with financial literacy tools and providing direct economic relief to those offering their lives to serving the church, with varying levels of financial stability as a result. By focusing on the leverage point of relief and financial literacy/empowerment, the hope is that pastoral leaders become more free to lead with creativity and hope, and become catalysts for hosting honest, life-giving conversations in their congregations, creating opportunities for all persons to directly address and engage financial realities within their faith communities.

These days, I am also a student in the American Studies program at IUPUI. In my doctoral work, I engaged a textual analysis of the different published Christian financial literacy curricula being used across my initiative. Some of these curricula are popular, some are less well known; some are venerable, some are brand new. (And there are many more not currently being utilized by grantees in the initiative, as well as many more locally tailored learning tracks that have been developed by the grantees in-house.) After doing a deep dive into these tools, here are some thoughts:

Tools can equip, and tools can also be used, by wise, attentive leaders, to transform.