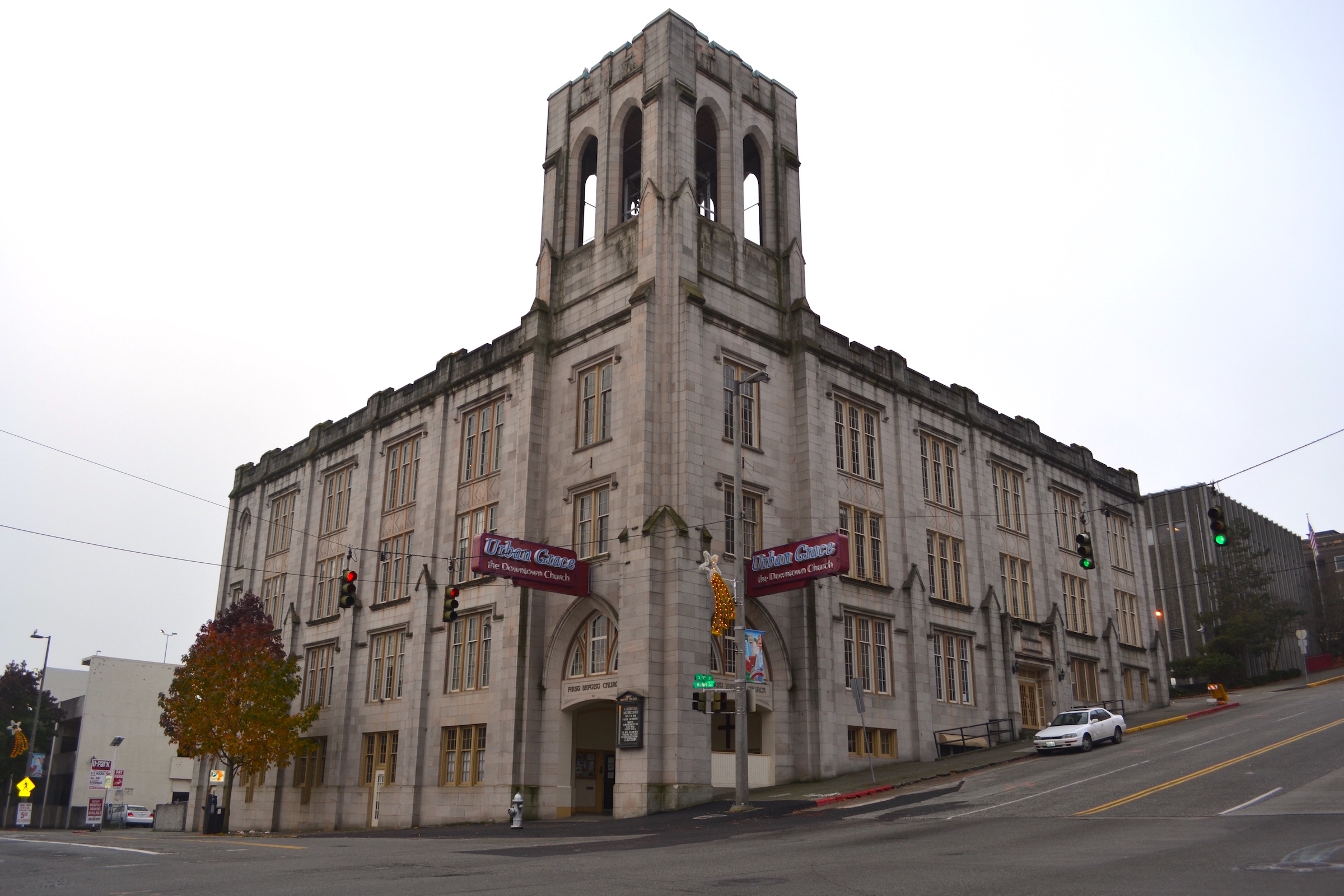 The faithful who gather at the corner of Ninth and Market Street in downtown Tacoma, Washington, have done their fair share of discernment over the past 125 years. Their latest decision led to the creation of Urban Grace in 2005, an ecumenical congregation with Baptist roots that now functions as a community hub for local nonprofits, dance companies, the farmers market, and more.

The history of this current iteration of Christian community that sits on the ancestral land of the Puyallup tribe begins in March 1883, with the founding of First Baptist Church and the first church building at this corner. In 1925, they decided to remain in the same location and built a new building. In the late 1970s, the people of First Baptist once again faced a decision about the future in their community. With membership declining, the congregation seriously considered a move to the suburbs, where they believed they could grow again.

However, after careful consideration, the members of First Baptist felt the call to remain in place and serve the community of downtown Tacoma. “Remaining downtown was an interesting and beautiful choice,” says Rev. Ben Robinson, pastor of Urban Grace.

Even with this renewed spirit and commitment, participation in congregational life continued to dwindle. By 2000, only twenty people regularly attended worship, and the closure of First Baptist and their forty-thousand-square-foot building became inevitable. In response to this ending, ecumenical leaders of Tacoma joined with the members of the congregation and determined to use the building to help jump-start a new ecumenical congregation. “There was no resistance because we knew we didn’t have much choice if we were going to survive,” says longtime member of First Baptist Willie C. Stewart. “We should have done it years ago.”

The first members of Urban Grace, including some from First Baptist, still faced an uphill battle to remain an asset to the community. They spent some time without a pastor and had to attend to decades of deferred maintenance on their nearly one-hundred-year-old building. In the midst of these hurdles though, Urban Grace built on community relationships that First Baptist had nurtured for years and began to cultivate new ties with their neighbors. “The church didn’t just move into a neighborhood; the neighborhood moved into the church,” says Robinson.

Urban Grace began increasing the number of community groups they hosted in their building. With funding and technical support from the National Fund for Sacred Places, a program of Partners for Sacred Places in collaboration with the National Trust for Historic Preservation, the people of Urban Grace deepened their understanding of the needs of their downtown neighborhood.

Because their church intentionally and clearly began meeting community needs, a regional foundation that typically does not fund churches agreed to fund investments in their decaying building. This foundation became convinced by the community-centric mission of the congregation and the use of their physical assets. “The building is the ministry,” says Robinson. This gift helped leverage more giving from the congregation for their mission and more funding from the National Fund for Sacred Places.

COVID has certainly shifted the practices of Urban Grace and the community members that use their buildings. Yet the groundwork the community laid in developing ties and gathering funding has helped them adapt to this challenge more easily. Today the church and the building are organized separately to allow for more flexibility and efficiency in their operations. The rental revenue that comes into the building does not always cover operating costs, but it has created a revenue stream that otherwise would not have existed.

Perhaps more importantly though, the opening of their building to community groups has allowed Urban Grace to fulfill its mission to serve the community. Their building continues to be a main avenue through which they show love for their neighbors. From the first decision to stay downtown to the welcoming and inclusive hospitality of today, the downtown congregation of Tacoma has shown what it means to love a place.