Why the Generations Approach Generosity Differently

Generosity appears to be alive and well in the Christian community today. In fact, almost nine in 10 practicing Christians (88%) say that generosity is either “extremely” or “very” important to them, and one-third (32%) feels very satisfied with their personal generosity, with Millennials leading the way in this respect (45%). Yet financial giving rates alone belie their apparent enthusiasm: Only 13 percent of Millennials and even fewer Gen Z (6%) give money on a frequent basis. Why the gap? It may seem like a glaring discrepancy—but it is actually an indication of how approaches to generosity evolve across generations.

New Barna research, commissioned by Thrivent, expounds upon findings from The Generosity Gap report and examines giving trends among practicing Christian adults in the U.S. In this new data, we look at multiple expressions of generosity in the Church—monetary and more—and the complex motivations for giving, which tend to vary by age and life stage.

Generosity Takes Many Forms, and Is Primarily Driven by Compassion
Though we often think of generosity in terms of financial gifts, its simplest definition is giving to others, whether of money, time, attention or other resources. This study covers five main categories of giving: traditional monetary support (just 1 in 5 practicing Christians express this most frequently), as well as emotional support (25%), gifts (16%), hospitality (7%) and service and volunteering (31%), which is the most common expression of generosity among practicing Christians. 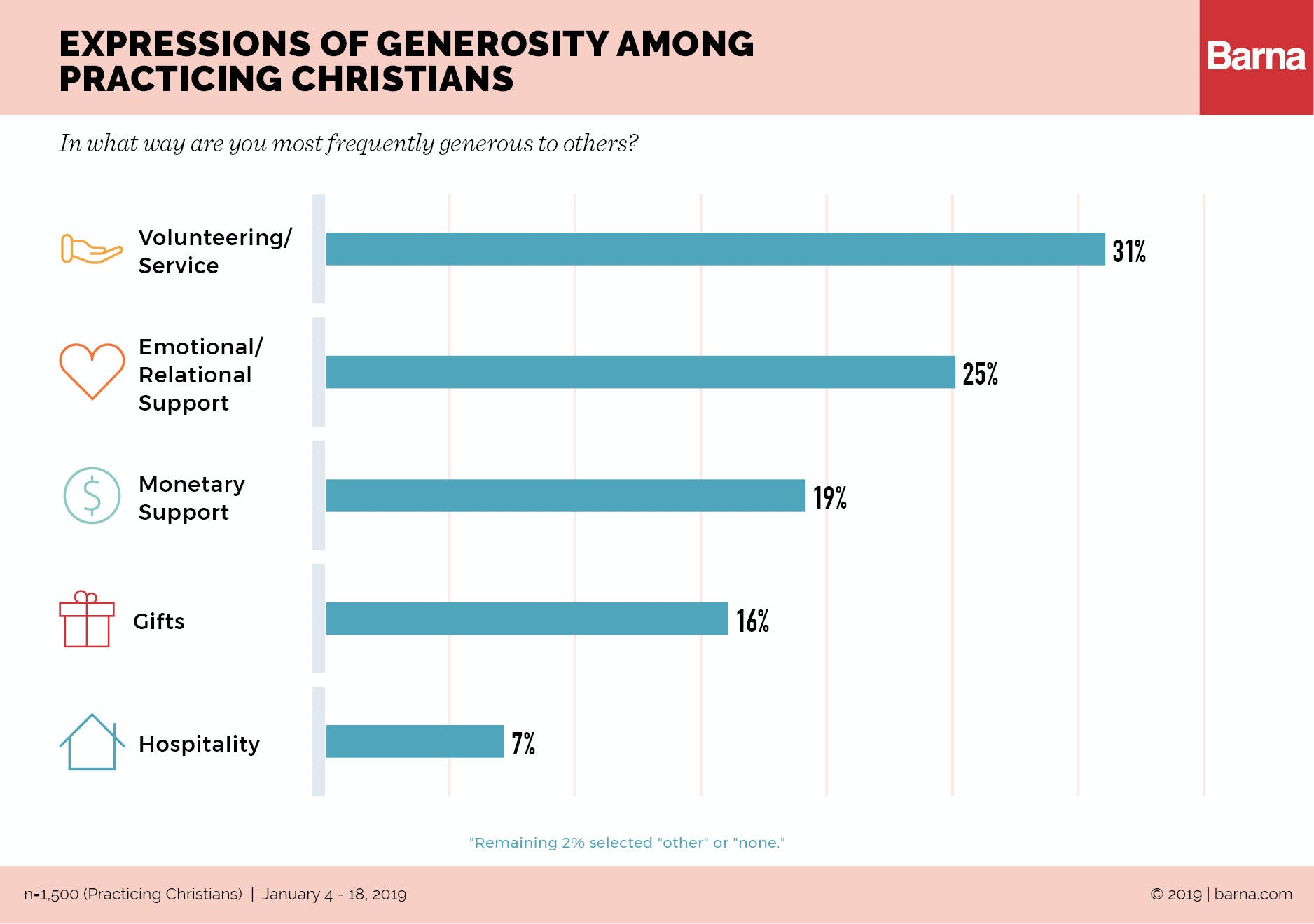 Key generational trends emerge among these different expressions of generosity. Gen Z (42%), Millennials (27%) and Boomers (35%) most often volunteer or perform acts of service, while Gen X (30%) prioritize providing emotional or relational support, and Elders (41%) usually give financially. Hospitality and gifts, though less common overall, are most embraced by Millennials.

It’s easy to see how some forms of giving may be more accessible given the life stage and resources associated with these different age groups. For instance, the leading edge of Gen Z included in this study are likely to be students and lean toward service and volunteering due to the limited resources, financial and otherwise, at their disposal. At the other end of the age spectrum, Elders, with perhaps more money to spare and increasing limitations on mobility or energy, focus on financial support. 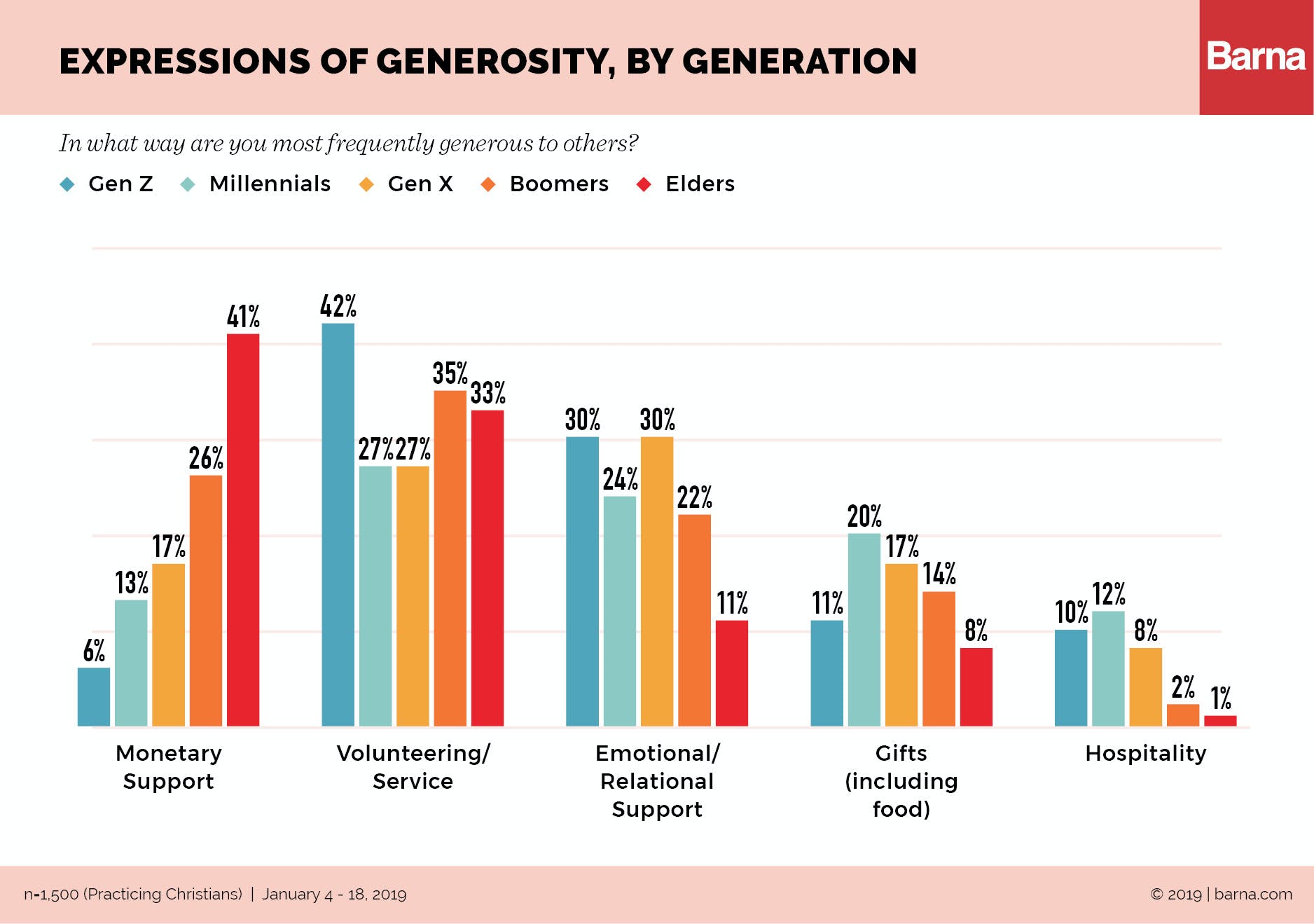 Beyond knowing what people most often give, knowing how and why people give is important in understanding Christian generosity. Expressing compassion and making a difference tend to be key motivators. Almost half of practicing Christians believe that “true” generosity is “always” driven by compassion (46%), and four in 10 (41%) say that it should always be impactful for the recipient. Conversely, few believe that authentic generosity is about its timing, whether spur-of-the-moment (15%) or planned (13%). Younger practicing Christians, especially Millennials, have stronger feelings on these points, emphasizing that sincere generosity should be driven by compassion, focused on making an impact and in-the-moment. 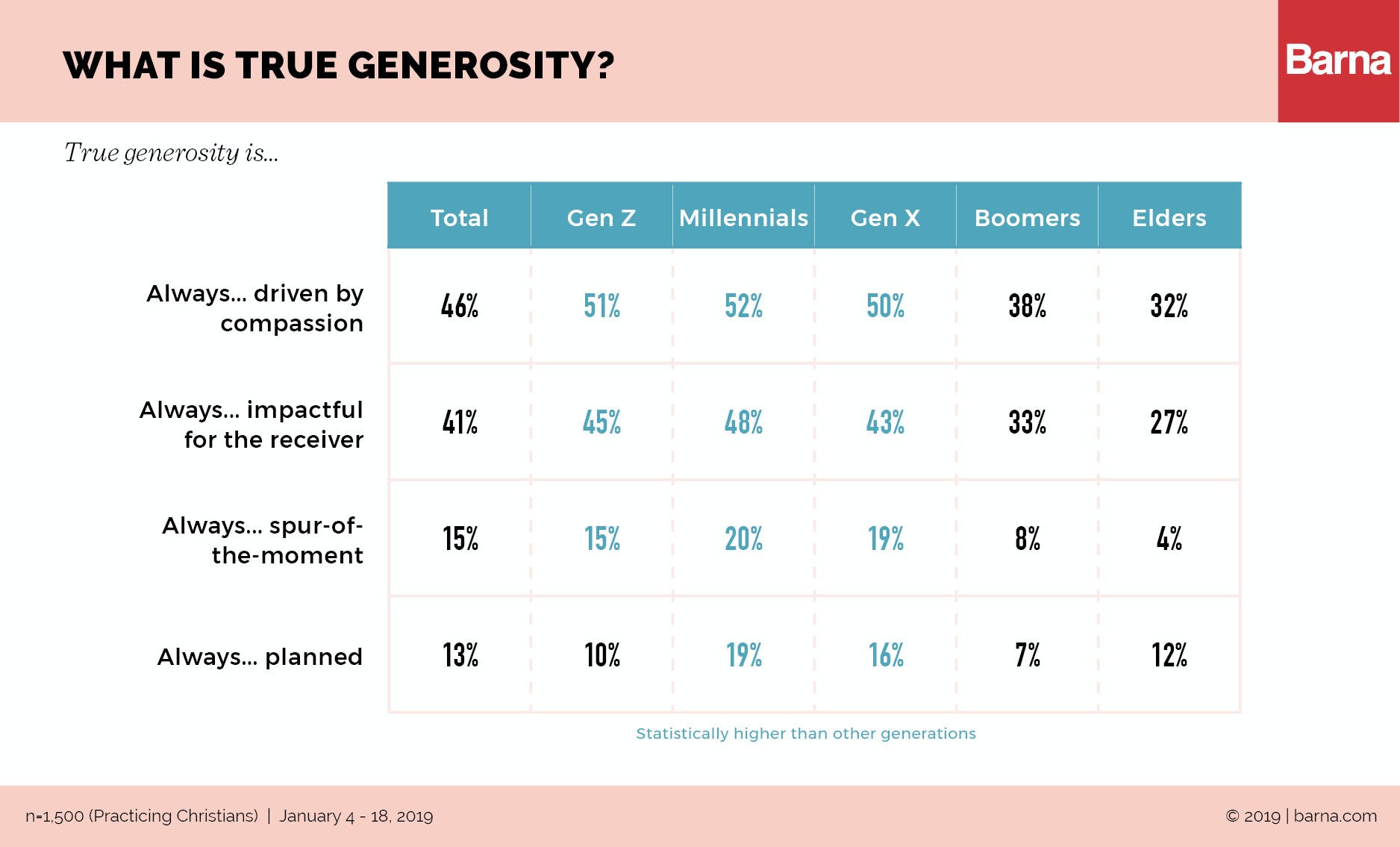 Below, we see some of these expectations reflected in Christians’ reported financial giving habits—and gain additional clues as to why other forms of generosity may be preferred by younger adults.

Financial Giving Is Often Spontaneous, Sacrificial—and May Be Hindered by Debt
Younger generations are almost five times more likely than Boomers and Elders to say their recent financial giving experiences were spontaneous rather than planned. For example, roughly one-third of Gen Z (35%) and Millennial (32%) practicing Christians characterizes their recent giving as completely spontaneous, compared to only 7 percent of Elders. The reverse was true for Elders; about one-third (34%) says their recent giving was purely planned.

As we’ve seen, younger generations are more driven by compassion, which could explain a tendency toward spontaneity or reactive giving. Consistent or pledged giving may also prove daunting to young adults in seasons of career-building and financial instability. Meanwhile, older generations, likely having established themselves financially and perhaps now thinking about personal responsibility and legacy, favor giving patterns that are pre-planned. 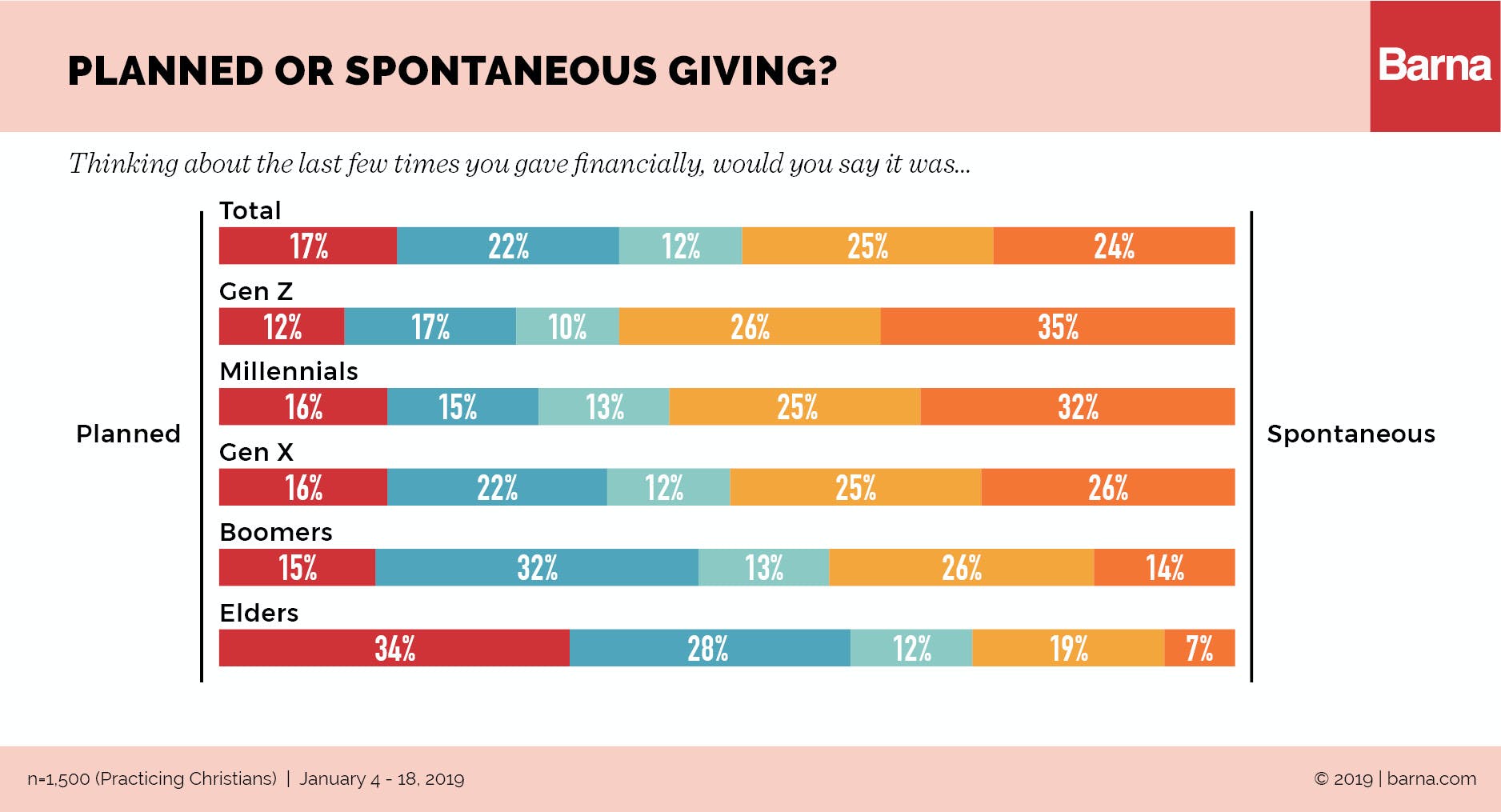 As a whole, practicing Christians are more likely to say their recent financial giving was sacrificial—perhaps a reflection of intent as much as amount—rather than offered out of a surplus. Generational trends are not as stark here, but Gen Z (25%) and Millennials (24%) are still nearly twice as likely as Boomers (12%) and Elders (15%) to say their recent giving was a major sacrifice for them. 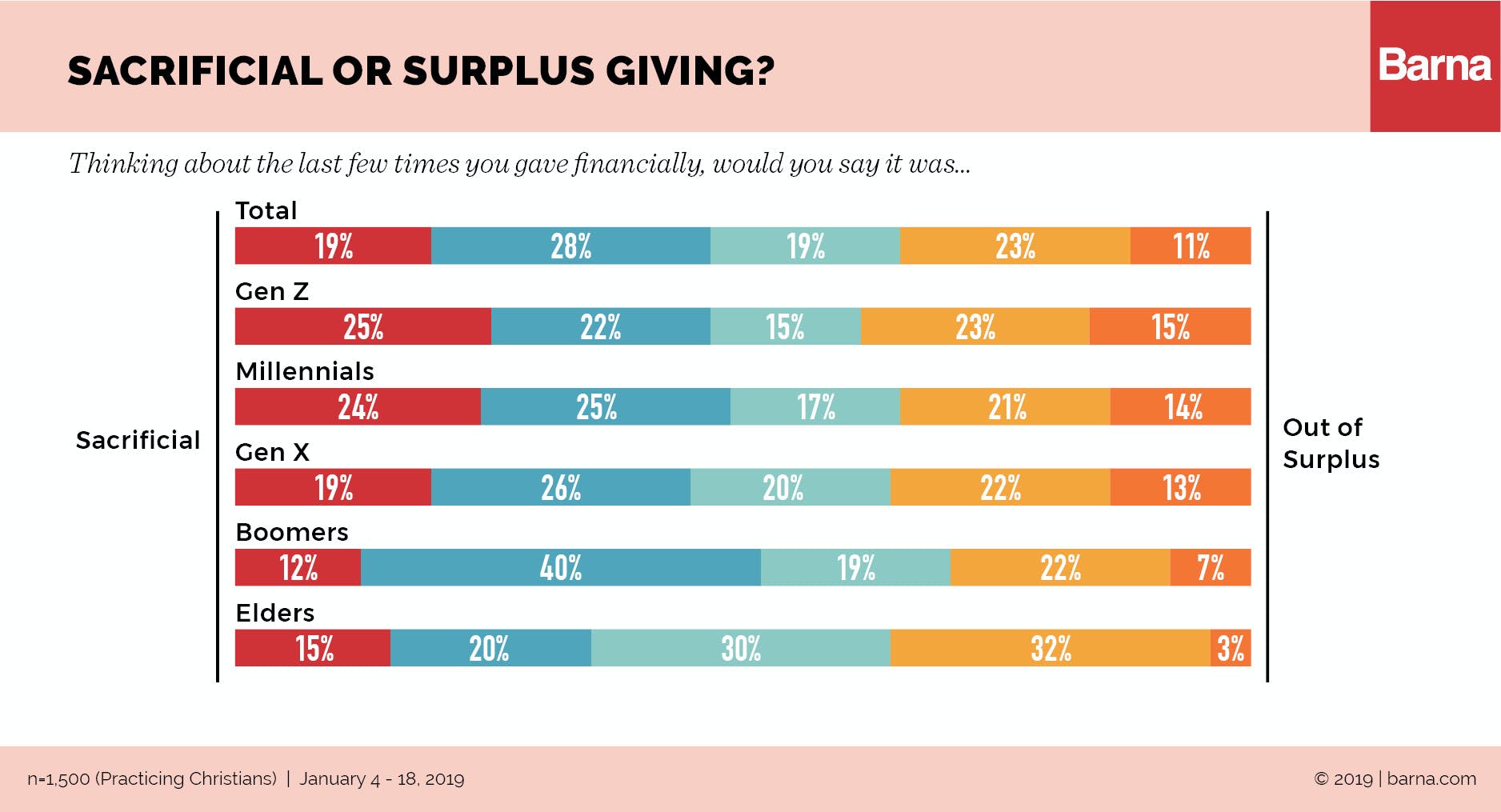 This and other studies establish some context as to why generations approach generosity from different angles and why, for some, financial giving can be an obstacle. Gen Z, who are increasingly concerned with financial and professional success, and Millennials, many of whom are in the early stages of their career, are much less secure financially than Elders, Boomers or even Gen X. Overall, nearly one-third of practicing Christians tells Barna they struggle with personal debt (32% say it’s either a “significant” or “huge” problem). This proportion peaks among Millennials (a generation marked by student loans and lower incomes), 40 percent of whom report that debt is a problem of at least some significance in their lives. Gen X is not far behind (34%). One in four among Boomers (23%) or Elders (36%) says they are debt-free, though some still face this financial pressure (26% and 16%, respectively, say debt is either a “significant” or “huge” problem). 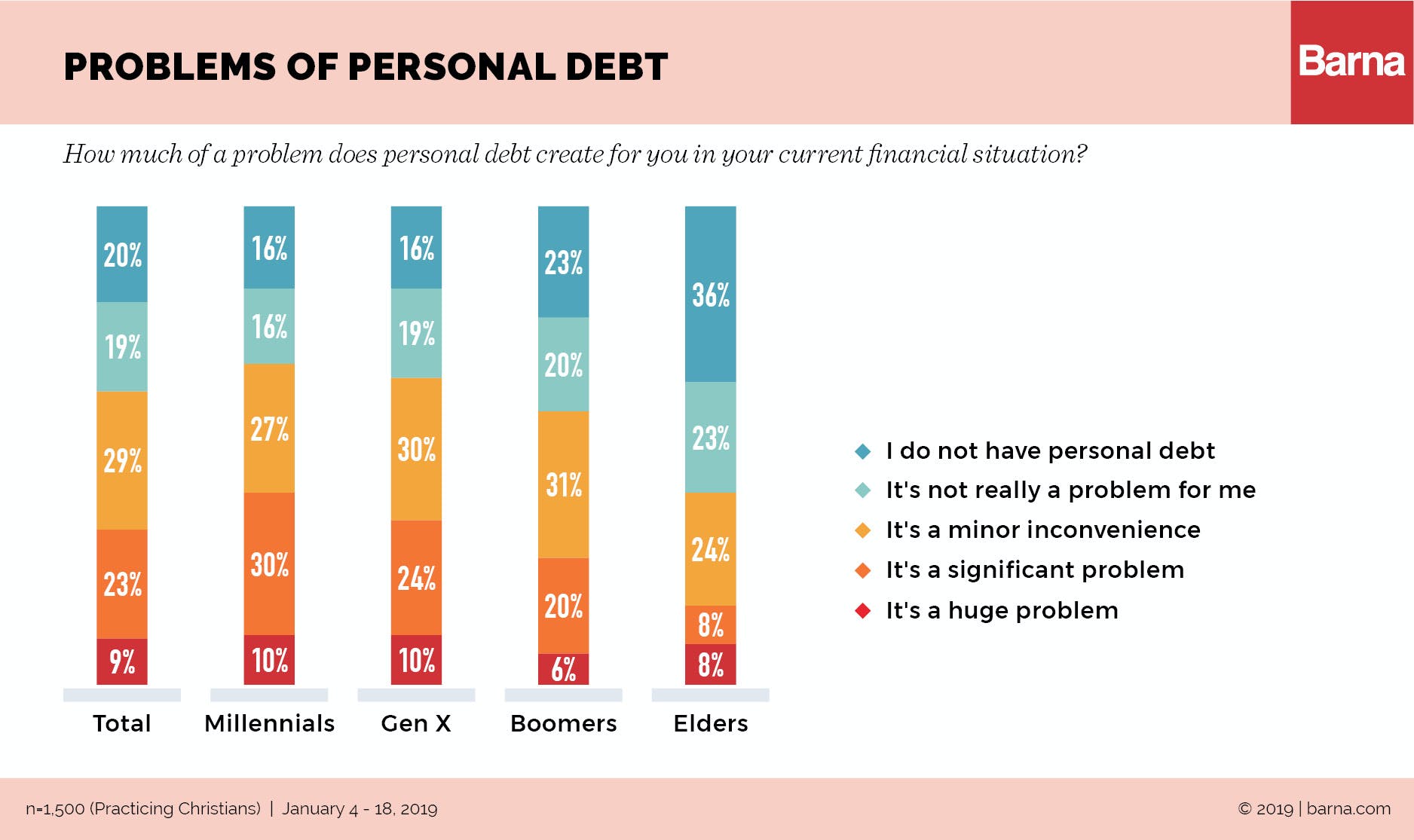