What Is a Tithe? New Data on Perceptions of the 10 Percent

What exactly are Christians’ prevailing views on matters of stewardship and generosity? And how is the local church shaping them?

While pastors today note the tithe as being central both to their church’s funding and its practice of generosity, new data uncovered in Revisiting the Tithe & Offering—the latest release in The State of Generosity series, produced in partnership with Generis and Gloo—suggests a traditional tithe is not widely understood or practiced today.

When it comes to generosity within the local church, just 21 percent of Christians set their church giving at 10 percent or more of their income. Typically, their giving varies (37%), while one-quarter (25%) doesn’t give to their church at all. Practicing Christians are much more likely to set their giving to at least the customary 10 percent tithe (42%), though that means the majority of practicing Christians is still giving in lower or less predictable amounts. 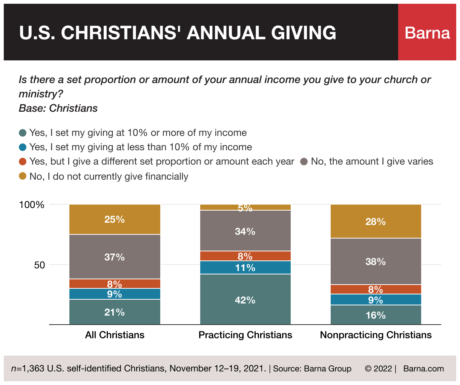 It’s not just that the tithe isn’t always intentionally set aside; the tithe is also not well understood by U.S. adults or even Christians in particular (and, we might assume, is not well taught through churches).

43% of Christians Say They Know What the Term “Tithe” Means

Surprisingly, among Christians (43%), and even specifically among church givers (44%), less than half can decisively say what the tithe is. Practicing Christians have much stronger awareness of the tithe (59% know what it means, 18% are familiar), though just over one in five of these faithful attendees (22%) does not recognize the term.

Compared with their congregations, nearly all pastors (99%) are familiar with the concept of tithing and its meaning. It’s striking that this overwhelming majority of church leaders is not imparting their knowledge of the tithe to those in their pews. 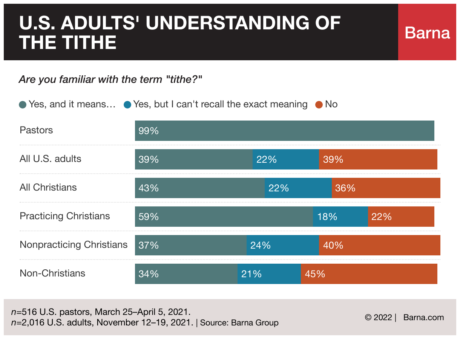 Could it be because pastors have not reached a consensus on the specifics or expectations of church giving? Though pastors don’t often regard giving that occurs outside the church as a tithe (just 27% do), they tend to say that a church tithe need not be exclusively financial (70% vs. 30% of pastors who see tithing strictly as financial giving). When asked how much their congregations should be giving to the church, one in three pastors (33%) favors the traditional 10 percent tithe—but one in five feels congregants should give enough to be considered sacrificial (21%) or as much as they are willing (20%).

Church leaders and Christians may wonder whether it matters if the tithe falls out of the mainstream. After all, church giving should not be reduced to an equation, and heartfelt, reverent generosity can be accomplished with or without deep knowledge of the tithe. Still, as a fundamental, scriptural idea of Christian stewardship becomes a hazy concept, it appropriately raises questions—about how modern ministries approach funding and resources, and, more importantly, about the broader culture of generosity being nurtured among Christians.